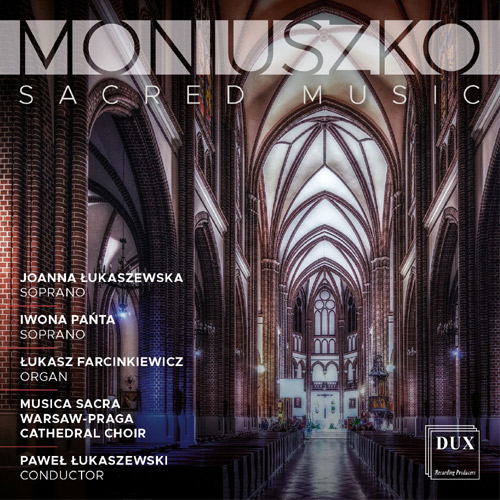 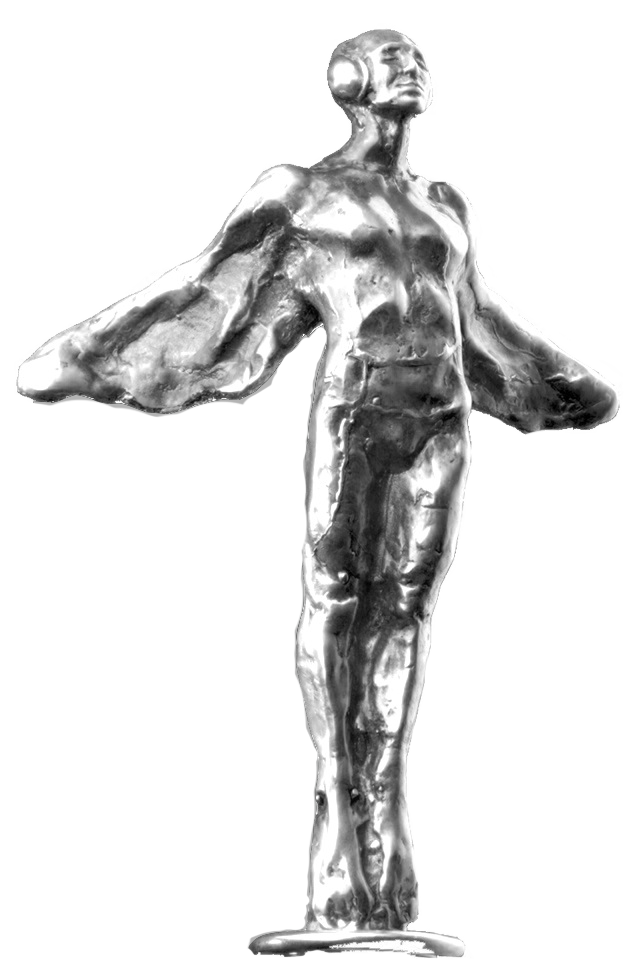 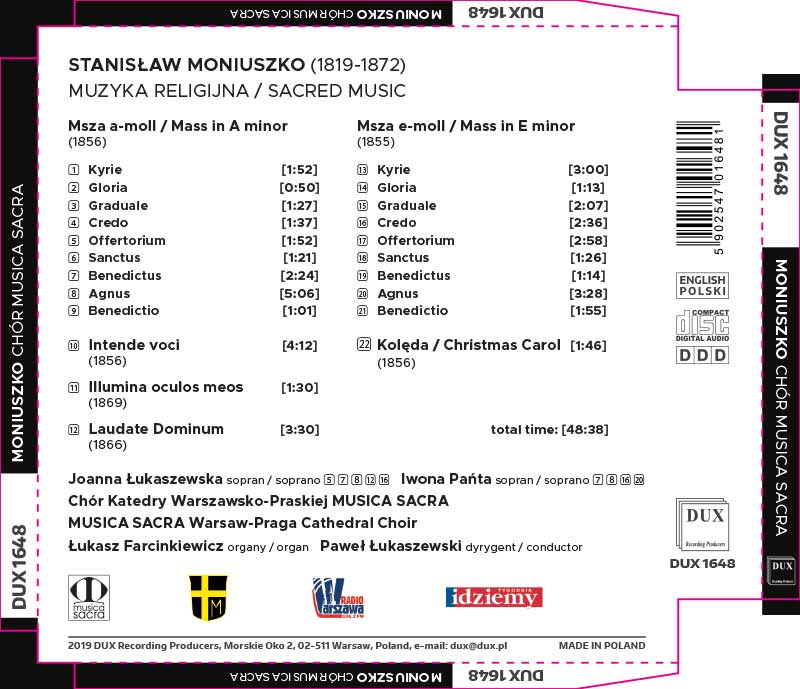 Religious music, alongside operas and songs, occupies an important place in Stanisław Moniuszko’s output. Moniuszko composed religious works all his life and the body of some ninety pieces that have survived represents a wide range of musical forms: masses, individual parts of masses, hymns, psalms, cantatas, litanies, motets, religious songs and their arrangements for organ. Moniuszko wrote this type of music out of his inner need, driven by fervent faith and an imperative to serve the Lord and his countrymen. The role of religious belief  as a source of  artistic inspiration was stressed by Moniuszko’s son, Stanisław, who reminisced: “My father used to get up very early, at five a.m., and go to church for the first holy mass. He was always very pious and his religious compositions stemmed  from the deepest layers of his soul. After mass, he took a long walk, usually beyond the town’s tollgate, and composed during that time or at least devised initial ideas.”

The provenance of Moniuszko’s sacred music also had  its pragmatic aspect. As an organist of St John’s Church in Vilnius, which boasted the best instrument in the town, Moniuszko committed himself to a mission of raising the standards of performance of church music. His religious songs, notably arrangements of the traditional repertoire, served precisely this purpose, and most of them were written during the Vilnius period (1840-1858). By penning numerous organ arrangements of church songs, Moniuszko hoped to help local organists to improve their skills, which, in his view, left much to be desired. This was a matter of great concern for him. In a hand-written remark on church music, Moniuszko formulated his task as follows:  “The first and most appropriate step to introduce some order into the music played in our churches is to make the songs accessible for performance, while the artistic means should not be used to embellish simple singing but, on the contrary, to bring out its beauty.”

Moniuszko’s legacy includes seven complete mass cycles, three of which are set to Latin texts and four are so-called ‘Polish’ masses, set to poetic paraphrases of the liturgical text in the vernacular language. The Mass in E minor (1855) for two sopranos, alto and organ (in its second version, dating from 1870, expanded with string quintet) contains the following dedication to a Vilnius canon “To the Honourable Adam Stanisław  Krasiński, Shepherd of the Vilnius Diocese, as a token of the Utmost Reverence.” The text of the setting exists  in two versions. The Polish one, by the poet Antoni Edward Odyniec, a close friend of Adam Mickiewicz, was translated into Latin by Józef Achilles Bonoldi, who was an Italian-born singer and Moniuszko’s friend; he also penned the Italian version of the libretto to the opera  Halka. Moniuszko’s efforts to have the E minor Mass published in Vilnius failed. The work was eventually published in Warsaw in 1860.

Of all of Moniuszko’s Polish masses, the one in E minor stands out for the richness of its compositional devices. It shows the composer’s attempt to achieve a homogenous cyclical form, with its individual sections based on a uniform motivic material particularly in its rhythmic language. Textural diversity as a form-building principle is another characteristic feature of the composition. All sections, apart from the Kyrie, contain imitative passages alongside the predominant nota contra notam technique. Moreover, Moniuszko consistently differentiates the performance forces by using numerous contrasts between solo and ensemble fragments and the organ solo episodes. The dialogue between the various vocal parts is given the  greatest expressive meaning in the culminating Agnus – the longest and most impressive section which, together with the ensuing Benedictio, rounds off the mass in a masterful and monumental fashion.

The Mass in A minor for two female voices and organ was written a year later, also to a text by Odyniec. It was dedicated to another of Moniuszko’s friends, the painter  Edward Römer. The shortest of the composer’s Polish masses, it is notable for the far-reaching simplicity of its musical material. This may be explained by the fact that it was written for the Charitable Society in Vilnius, and therefore with amateur performers in mind. Hence almost the entire text of  this 9-section liturgy is arranged syllabically, while its musical form is based on a regular periodic structure. Fragments of polyphonic texture are scarce. The simplicity of compositional devices in the vocal parts is compensated for by an expanded role for the organ, which in this mass is often in the foreground.

Duets for voices with organ or piano accompaniment continue a separate chapter in Moniuszko’s religious music. The best known composition of this kind is the duet  Intende voci orationis meae (Lord, hear my prayer) from the Psalms of David (1856). It received its first performance during the Good Friday service at St John’s Church in Vilnius on April 5, 1857. Moniuszko wrote about the concert, which also included his Mass in A minor in a version for “soprano and alto choir with the accompaniment of a melodicon”, in a letter to his friend, a Warsaw music critic Józef Sikorski.  The two subsequent duets,  set to Latin liturgical texts, date from Moniuszko’s Warsaw period. These are the psalm Laudate Dominum (1866) and the gradual Illumina oculos meos (Lighten mine eyes) dating from 1869.  All these works are renowned for their highly melodious character, the meticulous prosody of the Latin text and utmost concern for the right balance in the dialogues between the vocal parts.

The last piece on the CD is the popular Christmas carol My przed wami dziś stajem (We are standing before you today) for  soprano, alto and piano, with words by  Władysław Syrokomla, one of Moniuszko’s favourite poets.  This joyous song in stanza form was published for the first time in Jan Jaworski’s ‘Astronomical and House-keeping Calendar’ in 1856. It was later included in the seventh volume of Moniuszko’s Home Songbook.

Moniuszko’s religious works, like his operas and songs, were an expression of the composer’s artistic and patriotic service to his countrymen at a time when Poland did not exist as an independent state. Prior to the 1863 January Uprising in the Russian zone of partitioned Poland, Moniuszko’s music aimed at upholding the national spirit. In later years, after the failed insurgency, it brought comfort and uplifted  peoples’ hearts. That Moniuszko treated his artistic activity as a service to society and patriotic obligation is corroborated by his own words: ”If I love my work, then I love it as an honest means of contributing to my country’s well-being. And if this work helps people in their difficult experiences, then it definitely has God’s blessing.”

AWARD OF THE ASSOCIATION OF CATHOLIC PUBLISHERS - FENIKS 2020